The purpose of this walking tour is to see the places that would have been here during the Revolutionary War and to hear some of the stories associated with the War and Newtown. Newtown was the county seat of Bucks from 1725 to 1813. There are many things in Newtown of interest besides what is covered by this brief walking tour. However, it is hoped that this tour will bring to your attention just a sampling of the historical heritage that is so rich in this town.

Though the walking tour may be started anywhere along the route, as outlined on the map, we suggest starting at the Court Inn (1)

“The streets of historic Newtown tell a story that spans three centuries — a story that is alive with the people, events, and places that make Newtown one of the treasures of our common American heritage. Originally there were 11 roads leading from the townstead to the surrounding county. Just after the Revolutionary War, as the importance Of these roads increased, their names were changed from those Of British royalty, to those Of Our Revolutionary War heroes, such as Washington, Jefferson, Greene, Sullivan, Mercer, Sterling and Barclay. The very names of the many streets in Newtown are reminiscent of the deep history that sprang forth from this town, perhaps some of the most vivid reminders that remain today.” (Excerpt from the publication Historic Newtown, p. 9.) The Court Inn (known as the Half-Moon Inn during the mid 18th century) is one of the oldest and most historic buildings in Newtown. It was the original home of Margaret and Joseph Thornton, built in 1733 as a tavern, and was a popular gathering place when Newtown was the county seat. Attorneys and those with court business would have stayed here, for which it got the name “Court” Inn after the Revolutionary War. During the Revolutionary War, women ran the two main inns in town. The Court Inn has served as the headquarters Of the Newtown Historic Association since 1962 and is on the National Register of Historic Places. The Inn is open for tours showcasing many artifacts relating to Newtown’s historic heritage.

Walking down the street, notice that the dates of most of the houses are in the 1830’s. In the time span of the Revolution, you would be looking at the kitchen garden and orchard of the then, “Thornton Inn.” Across Court Street was the stone stable for Thornton’s Inn. The house on the left (107 Court St.) was built in 1782. Edward Hicks resided at this address from 1811 to 1821.

In 1776, a large log stable, owned by Francis Murray would be on the SE corner. You will hear about Francis Murray later. Next door to the stable was the Joseph Worstall house built in 1774 (the stone house in the center); Joseph Worstall was a Cordwaimer (leather worker) and also had a tan yard on the property. George Washington was said to have had a pair of boots made at the Worstall shops, which he purchased during his stay in town. This block is the old section of Court Street showing 18th century houses; it is also the most photographed block in Newtown.

During the Revolutionary era, Court Street stopped at Penn Street. The plot Of land here measured two acres and it extended from State Street to the meadow. This land was owned by Deborah Siddon. A stone house stood here at the edge of Penn Street and a log cabin was also on the property. Court Street was extended in 1788. At that time, County Cornwall, Newtown’s first African American landowner lived in a tenement house here.

The Whitehall Hotel was built in the 1800’s. In 1776, a frame house was located here, which was occupied by the Quartermaster Department with the County Treasury’s Office. At 10 pm, October 22, 1781, the Doan brothers went down to 252 South State Street, held the County Treasurer John Hart at gunpoint and dragged him here and forced him to open the treasury. They got 1307 pounds in paper and 735 pounds, 17 shilling, 19.5 pence in species (coins), which is the equivalent of about $2100 in today’s currency – a fortune then. The Doan brothers were an outlaw gang and known Tories. Coincidentally, the raid was three days after the surrender of Cornwallis at Yorktown.

On the west side of State Street was the Newtown Commons. It extended from Penn Street (Lower) to Frost Lane. There is a small parcel left at the base of Green Street. The commons allowed the residents access to the many springs to water and graze their animals but over time it was misused and eventually became a nuisance area.

On the SW comer was the stable lot of the Justice’s House, where it is said that there were three outbuildings for the Inn. On the NW corner we see the back yard of “the Red Lyon Inn.” Note the “well sweep” (the long pole used to balance the bucket) and the dairy (the small square building with vents) where milk and cheese was stored in the Revolutionary times.

The “Bird -in-Hand” Tavern, formerly the “Red Lyon Inn” and/or the “Old Frame House”. Red Lyon had English connotations so the name change would be necessary after the revolution. In the 18th century, the tavern or inn was the place for meeting of various organizations and a place to exchange and debate news. A stage coach from Bristol, a rider from Philadelphia, or a wagon home from delivering food to market might have actually carried the messenger bearing the Declaration to Newtown citizens gathered here while they were “chewing the fat.”

A British raid on February 9, 1778, is reported on the memorial stone. “Sixteen American soldiers, guarding military uniforms being manufactured on these premises, were overpowered by a raiding party of forty enemy cavalrymen and infantrymen. In the heroic but hopeless defense of their post, five guards were killed by gunfire, four more wounded, and the others taken prisoners of war, one of whom was Francis Murray.”

Following the raid, Walter Stewart, Colonel in the 13th PA regiment wrote: “…My hopes Of getting my Regiment genteelly and well clothed this campaign are vanish’d…My poor fellows are in a most deplorable situation at present, scarcely a shirt to one of their backs and equally distress’s for the other necessarys; but they bear it patiently…”

The sign “Bird in Hand’ is a reproduction of the one that E. Hicks might have done circa 1817.

The Justice’s House was built in 1768 by Anthony Siddon at 105 S. State St. This was the Tavern for a wealthier clientele; justices of the court were entertained here. Widow Deborah Siddon was the Innkeeper during the revolution years. The tour passes by the former site of the stables and outbuildings.

After the Battle of Trenton, Lord Stirling, aka. William Alexander (1726-1783 @ age 50 in 1776), was left in charge of the prisoners partially due to his rheumatism and a cold. This was his headquarters after the battle of Trenton and historians report a sumptuous dinner with good wine given for him on January 17, 1777. Lord Stirling was born in New York. He petitioned the House Of Lords for the title of 6th earl of Stirling and was refused but was known as Lord Stirling in the USA. He was also a founder and first governor of what is now Columbia University.

The Thornton House (now “The Black Horse Tavern”), located at 101 South State Street, was purchased by Margaret Thornton in 1754 and sold to Francis Murray in 1772, where his family operated a general store. In 1776, this was the home Of Francis Murray, merchant (1731-1816). He owned the log stable on the corner of Mercer and Court streets and was captured in the raid two doors down. Murray was an Irishman by birth and owned several farms and properties in Newtown. In response to the call from the Continental Congress on August 21, 1775, 52 residents of Newtown responded and formed into a company under Captain Francis Murray. He became a major in a PA regiment in the Continental Army and his commission was signed by John Hancock February 6, 1777. After the war, he was the justice of the peace and a general in the militia.

Francis Murray is sometimes said to be the most captured officer in the Revolutionary War. He was first captured by the British in NY; released on December 8, 1775; returned to Newtown in time to escort Hessian prisoners to Philadelphia and then to Lancaster.

He was captured on February 9, 1778 in the British raid upon Continental supplies at the Red Lyon Inn. He secreted himself in an empty sugar hogshead (large barrel or cask) in the cellar of this store and was a prisoner until 1780.

The County Building from State Street, in line with the First National Trust Office (built in 1796 by the County Commissioners as an Office Building), were: Gaol or Jail and Keeper’s House with the original foundation now in use; County Office building and Court House. The Work House was up State Street by the alley (now gone) near the Temperance House.

Further north on State Street was the Raguett House, now fronted by the jewelry store, which was a general store. The Temperance House was built in 1772 as McMinn’s tavern and school. The Brick Hotel, Amos Strickland’s Mansion House, was the northernmost building in the village in 1760; a two story brick building. Amos Strickland died in 1779 and the development of Newtown began shortly thereafter to the east.

Join us for the NHA Annual Winter Dinner to recognize Homeowners and public building stewards for their efforts in making the 2022 Holiday Open House Tour a success. 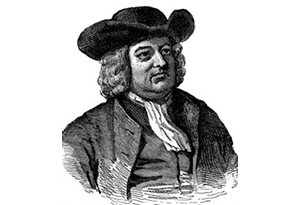 Hear Doug Miller, Director of Pennsbury Manor, discuss William Penn and the beginnings of the colony of Pennsylvania. 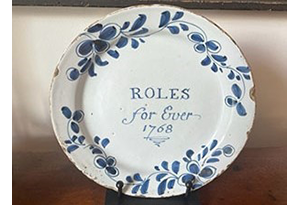 Doesn’t everyone have their favorite electioneering plate? Join us, as Kevin Kerchner, long time antiques enthusiast, shares his “Favorite Things” from his extensive collection.