The March meeting of the Newtown Historic Association will be held on Tuesday, March 21st at 7:30 PM at the American Legion Post, 41 Linden Avenue, Newtown. “Morell Smith Revisited” will be presented by Jon Guy, retired Army Reserve Officer and past Commander of Post 440.

The story behind the death of Morell Smith doesn’t end with the tragic tale of a Newtownian felled in the line of duty while serving his country, it continues on with the long and painful story of a prominent family crushed by their loss.

He was the only Newtown resident killed in World War I and his legacy sparked Newtown’s then newly-formed American Legion Post No. 440 to be named in his honor – a distinction still held today.

The son of Dr. Charles Smith and Mrs. Ann Smith of Newtown, Morell Smith was killed while patrolling with three other men at daybreak. According to newspaper reports, the volunteer patrol moved through a wooded area “in the cover of dawn,” only separated by a few yards when “machine gun snipes opened up.” Smith’s death was “instantaneous,” but it would take six years for that message to reach his family and community. When word of his disappearance hit Newtown, Smith’s father wanted answers. Devastated and enraged, Dr. Smith went to Washington some months later looking for closure – but all he got was a chillingly brief “mission in action” reply from government officials.

It would not be until July 3, 1924, after “an extensive and painstaking investigation,” that the office of the Quartermaster General would finally report Smith’s body was found and could be returned. He was, and is now, buried beneath a solemn boulder situated in Newtown Cemetery.

For Dr. Smith, the pain of losing a son to the cold hand of war was too much to bear. A prominent Newtown physician, Dr. Smith sunk into a deep and visible depression. Newspaper reports speak of him mourning after his son was taken at the hands of Germans.

“Close friends say he never fully recovered from the shock,” a Newtown Enterprise story read. Reports also indicated the doctor’s physical health also deteriorated. Then, on Dec. 11, 1927, at around 3 p.m., Dr. Smith wrote a note in his office reading, “I am going to see Stacy Brown [a lifelong friend of the Smiths] and then on to the cemetery.” He repeated that same message to his wife and left his home never to return.When Mrs. Smith found the note, she called Brown to see if her husband was there. Alarmed that the depressed man was missing, Brown rushed to the Newtown Cemetery where she found his car parked near the family plots.

She leapt from her vehicle and rushed to the grizzly and tragic scene. There, across a blanket stretched over his son’s grave, lay the lifeless body of Dr. Charles Smith. He put five bullets in his heart that afternoon.

The public is invited and refreshments will be served. This will prove to be a very interesting and informative meeting. No Reservations Necessary – For further information call 215-968-3914 or visit the NHA Website www.newtownhistoric.org. 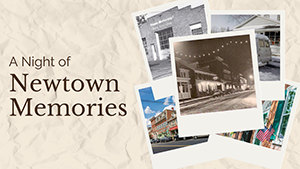 September 30, 7:00pm
Join Marty Moss-Coane at the Newtown Theatre for a trip down memory lane at the first-ever “Night of Newtown Memories.”

October 1, 10:00am – 4:00pm
Save the date! It is our proud tradition to feature high-quality crafters, artisans & fine artists; colonial-era demonstrations, reenactments & activities; farm stands; entertainment for all ages; and food from local restaurants.

October 8
This annual event is designed as a self-guided walking tour of the historic properties and farmhouses scattered throughout the Tyler State Park grounds.